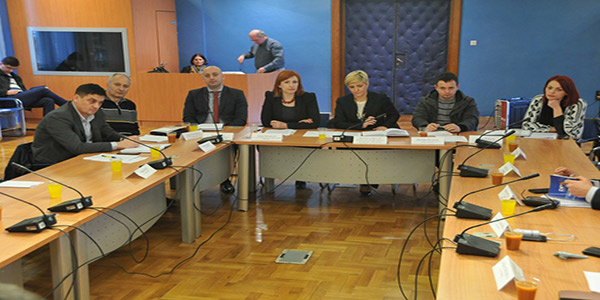 Debate on Implementation of Law on efficient use of energy

Debate on Implementation of Law on efficient use of energy took place at the session of Board for economy, finances and budget on 7 March 2016.

Besides members of the Board, the session attended representatives of Ministry of Economy – Directorate for energy efficiency, who are responsible for implementation of this law, Union of Municipalities, Chamber of Economy of Montenegro, nongovernmental organizations, that are involved in this area, Open Regional Fund for the South East Europe – Energy efficiency (ORF EE), German organization Deutsche Gesellschaft, which finances and monitors projects and processes on this topic in Montenegro for years.

After introductory speech of Ms Dragica Sekulic, Director of Directorate for Energy Efficiency who explained that after adoption of Law during 2015, started preparation and adoption of bylaws, and at the end of last year, 17 bylaws were prepared. Out of this number, 16 came into force but when the Law on efficient use of energy came into force, some deficiencies occurred in its implementation, in three areas:

Fulfilling of obligations of public bodies and local self-government units – Law has prescribed important duties in terms of planning and reporting about energy efficiency area, for public sector entities (at national and local level). Only small number of entities implemented prescribed duties in previous period. It is important to undertake specific activities in order to improve the situation. The best indicator of this situation is the fact that even after four years, since law duties have been prescribed, specific entities still does not have registry of buildings and appropriate data on energy costs and investing in specific buildings, which makes good planning difficult.

Key conclusions of this debate were as follows:

Continuous budget support in the frame of this area does not exist, which additionally prevents good and consistent implementation of the Law, while the EE Directorate receives less funds from the budget then it requires. At the same time, this is the best indicator for interest and readiness of executive power for improvement of situation in this area. Large part of implemented activities in this area are results of credit lines and donations.

Despite adoption of new law regulation, old problems in practice still exist and are primarily reflected in (lack of)development of plans, lack of software, poor human resources, and lack of finances.
Additional problem is lack of sanctions for failing to act in accordance with the Law, which will be in focus of acting of the line Ministry and inspections in the future period. Failure in fulfilling obligations of local self-government units is one of the key obstacles in implementation of this Law, and local self-governments often do not have capacities for implementation of obligations prescribed by the Law.

Part of MPs pointed out on problem related to lack of awareness about importance of energy efficiency saying that this was the problem of both society and the country. In that sense, education of public is very important, where media and its reporting have significant role.

It is important to emphasize that discussion at the session of the Board was very dynamic on all mentioned topics and all members of the Board gave active and constructive contribution in identifying of problems and seeking of adequate solutions. This type of debate are organized for the third time and are continuation of cooperation between School of Democratic Leadership and GIZ – Open Regional Fund for the South East Europe, Energy Efficiency with the Parliamentary Board for Economy, Finances and Budget, aiming to constructive dialogue about preparations and implementation of law regulations in the energy efficiency area.